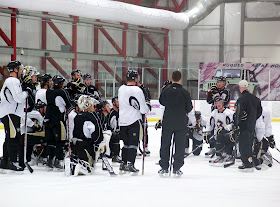 With both Pittsburgh and Wilkes-Barre/Scranton having a day off from on-ice practice, management and staff are probably making their final cuts this afternoon in advance of tomorrow's NHL roster deadline.

After the jump, a look at the rosters for both the Pittsburgh Penguins and Wilkes-Barre/Scranton Penguins and what's left for Pittsburgh to trim. I'll have a similar breakdown for the Philadelphia Flyers and Lehigh Valley Phantoms later this week.